In recent years, Bootstrap has evolved from a basic non-responsive framework to a fully-fledged modern responsive framework. Originally developed by former Twitter employees Jacob Thornton and Mark Otto, Bootstrap is now being used by a number of reputable companies – including Spotify, Nasa, Osmo and LiveRamp.

Around a month ago, the company released the second Alpha version of Bootstrap 4. Even if the shiny new version of the world’s most popular front-end framework is still under-development, it gives us insight into all the new cool changes and features that you’ll see in the final stable release.

Let’s take a look at what Bootstrap 4 will bring to us!

#Moved from LESS to SASS:

The most revolutionary change in Bootstrap 4 is switching from LESS to SASS. Until version 3.x, Bootstrap has been using LESS, but from the new version, the framework will use SASS as its main CSS preprocessor. The key reason behind this change is that SASS compiles things much faster as compared to LESS. As a result, Bootstrap 4 will be faster than its predecessors.

To let you better target mobile devices of viewport width 480px or less, a new dynamic tier is added to the grid system of the framework. In Bootstrap 4, mobile devices under 480px viewport width will use the .col-xs-XX class selector, while large screen devices will make use of the .col-xl-XX class selector. Moreover, media queries will now be defined in em instead of px to facilitate easier scaling across different screen sizes.

Bootstrap 4 introduces a new unified UI element called Cards, which will replace Bootstrap 3’s old panels, wells, and thumbnails components in order to provide users a more streamlined development workflow. Think of them like an extensible and flexible content container that allows you to easily create different types of elements like headers, footers, contextual background colors and more.

Optional support for Flexbox is another great improvement made to Bootstrap. Now simply by setting a single Boolean variable $enable-flex to true inside the .scss file and re-compiling the CSS file, you can turn all grid components into the Flexbox mode. Since the Flexbox module is not supported by Internet Explorer 9, use this feature only if you don’t need to provide IE9 support.

Bootstrap 4 makes it easier for developers to create custom designs, absolutely without having a separate style sheet like version 3. That’s because the development team has consolidated all the variable options into a single file called _variables.scss, which lets you customize things such as grid breakpoints, colors, tables and tables with little effort. All you need to do is to update a variable and then recompile.

To help you get rid of pesky poly fills and let you make the most of CSS3, the core team finally decided to completely drop the support for Internet Explorer 8. This smart step is taken because IE8 doesn’t support media queries, which play a vital role in incorporating responsive design into the framework. However, if you still need IE8 support, you’re free to use Bootstrap 3.

#Rewrite of All JavaScript Plugins:

Every JavaScript plug-in has been rewritten in EcmaScript 6 (ES6) so that you could make the most of latest JavaScript specifications and enhancements. The main purpose behind this course of action is to improve the overall frontend experience for developers. Although you might notice some plug-ins (such as the affix plug-in) are removed but in fact, the framework is more powerful than ever before with new UMD support, option type checking, generic teardown methods and more.

Since the documentation for Bootstrap 4 has been completely rewritten in Markdown, it’s much easier to navigate, search and use. By breaking down features into components, content and layout, the new documentation presents information in a very structured and logical manner. Best of all, each component in the new documentation has its own page. Other than that, the brand new search form makes searching easier for developers.

Believe it or not, Bootstrap 4 has 30% smaller file size than the latest Bootstrap 3 build. Previously, it was around ~123KB and now it is mere ~88KB, which is really a huge reduction. Honestly speaking, getting a smaller footprint without losing any feature is a great achievement for the Bootstrap development team. Furthermore, if you want to make the file size even smaller, use only the features of Bootstrap that you really need.

Bootstrap 4 offers you a whole bunch of new quick start options, each one requiring a different skill level and use case. However, the way you choose to integrate Bootstrap with your web application depends on what suits your particular needs. Some of the new ways to quickly get started are:

Note: -Pre is only required until the stable release of Bootstrap 4.

why you must have a mobile friendly WordPress site [Infographic]

As mobile websites are specifically designed to look and perform well on handheld devices, they deliver the best possible experience to users. Having an excellent navigation control and incorporating mobile-specific features like click-to-call, a mobile-friendly site not only makes it easy for customers to contact you, but also lets them easily access any kind of content without the need to zoom in or out.

When a user tries to browse a regular desktop website on a mobile device, it either loads very slowly or sometimes not at all. This happens because the website code is not structured to work with mobile devices. On the other hand, a mobile-optimized website is built with mobile screen dimensions and mobile browsers’ standards in mind. For the reason, it takes lesser time to load as compared to a traditional desktop website.

When a user accesses your desktop website on a mobile device, he gets frustrated due to the bad browsing experience and leaves the site immediately. But if your site is mobile-friendly, users are able to easily navigate through to access the desired content on their handheld devices. Thus, they stick to your website longer than usual. The longer visitors stay on your website, the higher chances you have to convert them into customers.

As a general rule, the larger audience you have, the higher are the chances of improved conversion rate. By optimizing your website for mobile devices, you appeal to a wide audience of customers, which results into a higher conversion rate. Also, a smooth user experience on mobile devices makes it easy for customers to use your services or purchase your products. In short, a mobile-friendly design helps you reach more customers.

If visitors don’t find your website mobile-friendly, they simply go to one of your competitor’s site instead of turning their PC/laptop on to visit your ordinary desktop site. Thus, you lose your customers to your competitors. A mobile-optimized, on the other hand, is capable of capturing your visitors’ attention and turning them into customers. Hence, it always keeps you in a better position than your competitors.

Now that you have understood the importance of having a mobile-friendly site, let’s take a look at different ways you can optimize your WordPress site for mobile devices:

If you’re happy with you existing WordPress theme, you can make it mobile-friendly using CSS media queries. However, this route may prove a little tricky because you’ll need to fix every single design element of your existing theme.

Upgrade to a Responsive Theme:

If you don’t want to get your hands dirty with any kind of code, this method is perfect for you. Simply pick a free or premium responsive WordPress theme, activate it via your WordPress dashboard and your website will automatically be converted to mobile-friendly.

Use a WordPress Plug-in:

There are a number of WordPress plug-ins available, using which you can make your WordPress site mobile-friendly. Displaying a separate mobile theme for mobile visitors, these plug-ins optimize your site for all types of mobile devices. WPtouch is such a great plug-in!

Finally, you can hire a professional WordPress mobile optimization service to get your site converted to mobile-friendly.

Responsive Web Design: Why Your Website Must Have it to Stay Google-Friendly [Infographic]

Here are some rock-solid reasons why you should consider using this technique:

Since a website designed with responsive approach has the ability to adapt to device of any screen size, it provides a flawless, optimal and consistent experience to users. If the website is responsive, they’re not required to pinch or zoom the screen of their devices to read the content. That’s the reason; they prefer to browse a website on mobile than desktop.

Recently, search engine giant Google announced that the “mobile usability” of a website would be considered an important factor to decide where to rank it in search results. That means if your site is not responsive, it will likely to rank lower in search engine results. Other than that, responsive design has always been Google’s favorite mobile configuration since it perfectly meets to their “link” and “mobile-usability” guidelines.

Before the invention of responsive web design, developers were required to create and maintain several versions of a single website. That was a very time consuming, costly and cumbersome process. Responsive design made it relatively easier. Now, developers just need to maintain a single URL and a single code base, which saves both their money and time.

Since responsive design allows users to easily make purchases from a wide range of devices, you’ll find a dramatic boost in your site’s conversion rate. Incorporating mobile-specific features – like barcode scanning and GPS route planning – a responsive website increases the chances to win more sales. Researchers say if a site is responsive, it’ll have 8% higher conversion rates than those that are not responsive.

#You’re Safe for the Future:

And most importantly, responsive design makes your website ready for all new devices that will be introduced in future. You’ll never be required to create a special strategy every time a new kind of device is launched in future. All you’ll have to do is to update your CSS media queries for that specific device and you’re good to go. There is no need to create multiple new versions for newly introduced devices. 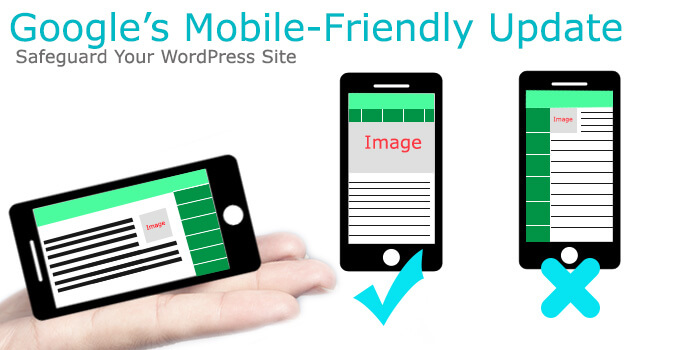 Google’s Mobile-Friendly Update: How Safe Is Your WordPress Site?

Learn how to cope with Google's new mobile-friendly update.